Private Investigator John Blacksad (born 1926) is the protagonist and narrator of the Blacksad comic series along with its videogame, Blacksad: Under the Skin. He is a black cat detective who also undertakes the job of a bodyguard for rich and important celebrities when he is in short of money. He is a WW2 veteran, making him an above-average marksman and hand-to-hand combatant. He is known to frequently use the alias John H. Blackmore on several fake IDs (debt collector, FBI agent, and customs officer).

Blacksad appears to be in his 30s and fairly tall and well-built. He has black eyes with green sclera. His fur and skin are completely black except around his mouth and nose, which is white. He has whiskers extending from below his nose. He is usually seen wearing a dark green suit, a red-and-gold striped tie and a trenchcoat.

He is very clever, quick-witted, rough, and vigorous. As a skilled fighter and marksman, he can easily chase down people who committed crimes, and can easily win a fight with someone. He can sometimes be aloof when it comes to meeting new people or talking socially in groups. He is also loving and kind towards women.

Blacksad was born in 1926. He lived in a poor neighborhood, and spent much of his youth running from the police. At the age of 18, he became a soldier in WWII, and was taught how to be a professional in combat. During that time, his parents died.

Blacksad is first seen present with Smirnov at the murder of famous actress Natalia Willford whom he used to be involved with as a bodyguard and later, her lover for a short time. Clearly distressed and angered at the incident, Blacksad curses Smirnov when the latter told to keep his muzzle out of the case for his sake.

Later in his apartment, he painfully remembers his life with Natalia. He had been hired as a bodyguard for her after she received a threatening letter from an unknown source who claimed she will be killed by the said person soon. However their relationship later becomes romantic and they began to have a physical relationship. However Natalia had unhealthy relationships with other men as well, which finally tore her relationship with Blacksad apart. Blacksad had never seen her since until today when he saw her corpse. He vowed to make sure that her murderer be killed by his own hands.

He first goes to his friend Jake Ostombe, a heavyweight who informs Blacksad the name of Natalia's last lover: Leon Kronski, a movie scriptwriter. Blacksad visits Leon's empty apartment and his greeted by his maid, who informs him that Leon's other friend told her that Leon was on a trip. She also reveals that this other friend had bulging eyes.

Blacksad then goes to film producer Mr.Zenuck who angrily tells him that he has no idea where Leon is and that his other friend with bulging eyes told him that Leon was leaving. Blacksad is later assaulted by Leon's bulging eyed friend who turns out to be a goanna assassin. Blacksad headbutts the goanna and interrogates him, only to be kicked hard. The goanna then disappears.

Blacksad later goes to the Cypher Club and meets a rat who takes him to Leon's grave. Blacksad realizes that Leon was already dead and buried under a different name, Noel Krisnok. The rat slips away and Blacksad is immediately assaulted by a bear and a rhino who beat him severely. Blacksad manages to crawl out of the graveyard but ends up in jail. lying in the jail cell, he realizes only a powerful person could commit murders discreetly without leaving a trace. In the morning he is greeted by Smirnov who informs him that investigations on Natalia's murderer points very high and he was pressurised to stop the case. He instructs Blacksad to continue the case and kill her murderer and promises to cover his back.

Blacksad is later confronted by the goanna assassin in his apartment. The assassin had brought the murder weapon and is about to eliminate Blacksad when he is shot in the chest by the rat who was the same one who accompanied Blacksad to Leon's grave. Blacksad wrenches the gun from the goanna's hand and shoots the rat in the chest. The dying goanna finally reveals the name of the killer: Ivo Statoc.

Blacksad goes to Statoc tower and beats up the two guards who were the same ones who beat him in the graveyard. He confronts Statoc who first offers him a job and later bribes him. Blacksad rejects both and shoots Statoc in the head after the latter taunted him for standing by moral standards. Smirnov closes the case as a suicide and Blacksad walks out happy that justice has been accomplished.

Blacksad's face on the cover of the first volume 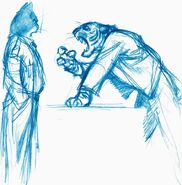 Add a photo to this gallery
Retrieved from "https://blaksad.fandom.com/wiki/John_Blacksad?oldid=4159"
Community content is available under CC-BY-SA unless otherwise noted.